Richard Watkins Richards held the dual position of Town Clerk and City Engineer at Dunedin City Council from 1904-1911. He put forward a report in 1905 to Council outlining the benefits of the new, modern underground conveniences that were popular around the world.

He designed the first underground structures in Dunedin – the Gentleman’s and Ladies in the Octagon, and the Gentlemen’s only in Custom House Square.

He could report with some expertise – he had designed the first one in Sydney on Moore Street (now Martin Place) in 1901. He did battle with the Dunedin councillors on the issue of cost. An underground convenience was estimated at £1500 – compared to an above ground urinal at £20 this was a huge cost to a local authority. Richards argued that they could be built cheaper and still meet all the needs.

He was sent away to design the first ones for Dunedin with a budget of £1200. It was put on hold until Council came up with the money – they created a special fund in 1909 for the cause and the first undergrounds were opened in November and December 1910.

Here’s some quick stats for you:

These stats seem huge (remembering 10 years earlier there were only 10 public urinals available across the city) and it seems hard to comprehend.

That is why the film footage below is gold – look at the people! What a throbbing metropolis Dunedin was in 1912. And if you look to the left hand corner about 10 seconds in you can see men going down the stairs of the Custom House Square undergrounds, showing the demand. I was so excited when I found this on the fabulous Ngā Taonga Sound & Vision website. Their wonderful staff edited the film for me.

This further strengthens my decision to do a thesis using a digital platform – different media can bring the past to life!

The very first locations for the underground conveniences were chosen because of their central position and that they were secluded. The key to having privacy and seclusion was obviously placing the facilities underground but above ground shrubbery played a large part in ‘hiding’ patrons from the public as they entered the facilities.

The local authority worked hard to supply the shrubs to create the secluded access ways into the facilities and the City Engineer was proud of the work around this – Manor Place urinal was described “an object of beauty – draped as it is in lovely native shrubs” in 1919.

Even in the 1940s, you can see the Octagon is largely grass and flowerbeds except for the side with the toilet entrances – these have shrubs.

Shurbbery was important to the ideal that these facilities were not obvious or seen – this attitude did change over the 20th Century.

The earliest publicly provided facilities I have been able to trace in the Dunedin City Council Archives collection are in 1861, recorded in the Dunedin Town Board letterbooks.

In 1861 the Town Board made a request to the government of the day to set apart portions of the Beach Reserve area (now where Cargill’s Monument is) for Public Water Closets.

The original toilets were shifted slightly to a new spot on the reclaimed ground in 1864. A report from the Inspector of Nuisances Nimon came in shortly after on 24 March 1864 complaining of the filthy state of them.

In April, the Town Board employed a man at one shilling a day to clean them.

The public facilities were seen as a way to improve the sanitation but as this Otago Daily Times article shows Dunedin suffered poor sanitary conditions in the “back slums” in 1864. The author states if the reader dared to venture off the main streets “let him adventure boldly behind its thin screen of decent houses and he will find himself in a marsh, covered with flax bushes, and irrigated by several streams as black as Styx”. The author dramatically goes on to state that “the copious black stream he has been tracing to its sources, has, however, shrunk into a narrow ditch of a yellowish green and extremely fetid filth, which flows sluggishly over a quaking black morass into which a walking-stick may be thrust to the handle without finding bottom.”

I wish interior shots of underground conveniences had been a thing! Luckily we have 1912 Manor Place above ground toilet still standing in Dunedin – as the doors were bricked up, it has remained ignored  for decades (therefore preserving the interior).

The inside would be very similar to the 1910 underground interiors, so this gives us a good insight of what the demolished ones may have looked like in their heydey. 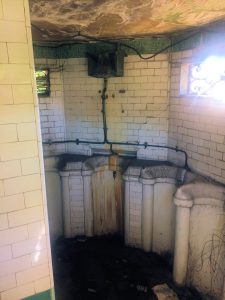 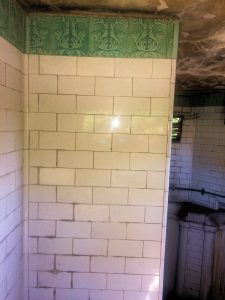